8 Powerful Signs of Male Attraction. Is He Attracted to You? 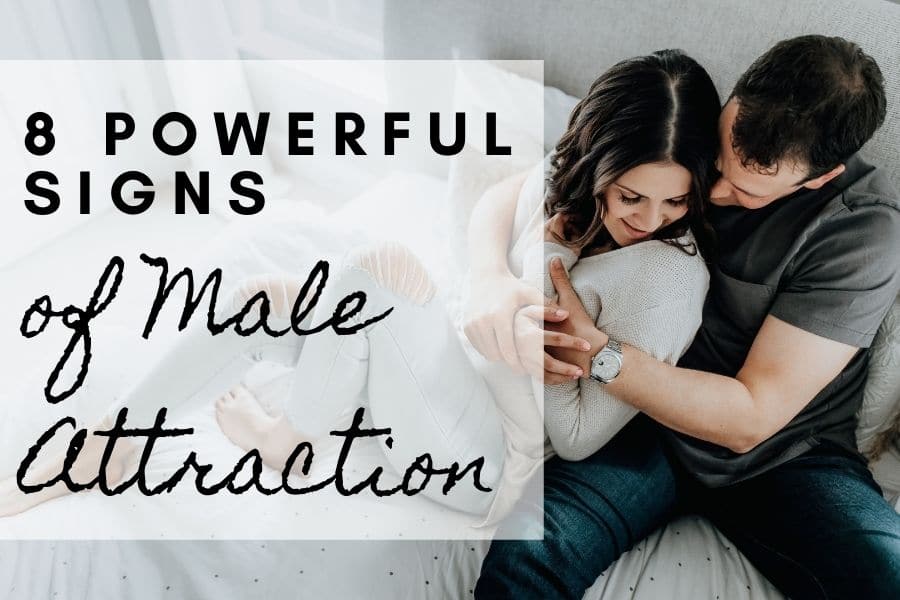 8 Powerful Signs of Male Attraction. Is He Attracted to You?

Are you wondering if your man or male interest is actually attracted to you? Just pay attention to his behavior and see if he is showing a few of these 8 powerful signs of male attraction. If he is not, then it might be time to have a conversation or move on.

While men tend to be really upfront about their general interests, they can sometimes leave one baffled when it comes to their romantic intentions. The way that men show if they like you can be hard to interpret if you don’t know the powerful signs of male attraction.

This happens all too often, which leaves you wondering if he wants something more than just a friend!

But it’s not an impossible puzzle to solve. Men are always showing their genuine emotions, whether it be through words or actions.

Get familiar with all our advice covered below. If all these signs point towards yes, then congratulations–you may have a pretender who actually cares enough!!

When a guy stares at you intensely, that’s probably the most palpable sign that a man has taken an interest in you.

In fact, if you’re struggling to learn how to tell if someone likes you, start with this. Men can’t stop looking at a woman when they’re interested. If they look directly into your eyes, that’s a sign they feel a bit more than just physical attraction.

Be aware that shy men may veer away from their glances when they feel intimidated. But if you catch their glimpse for at least a few seconds before they look away timidly, that should be enough to know they’re attracted (especially if they’re looking at you when you’re not looking at them).

2. He Tries to Physically Get Close to You

Men have specific male body language signs of attraction. If he is trying to get close to you, even in the simplest of ways (e.g., sitting close, walking nearby, or just getting in front of you in any way possible), it’s a tell-tale subconscious sign that a man likes you.

How to tell if a guy likes you but is hiding it? Easy, he just makes small changes in his way of moving when he’s close to you. He may pivot his feet to face you; his face appears completely attentive, and probably his body starts to balance back and forth to get closer.

3. He Can’t Help Touching You

The same goes for touch. A man that’s attracted to you may softly touch your arms or hands. They may try playing with your hair while they talk to you. Or if they put their hands on your shoulders or their arms around you, they’re all signs of attraction.

Among the most powerful signs of male attraction, touch is up there alongside intense stares.

But be careful. When a man starts to flirt a lot and becomes a little too touchy, he is obviously attracted and trying to playfully seduce you. So pay attention and react accordingly if you are looking for something serious.

4. He initiates conversation and Remembers Everything

Are you continually talking to the guy? Does he call you regularly and listen attentively to everything you say, even if it is the dullest of conversations for him? There’s a high chance this guy is in love with you.

When a man is secretly attracted to you, he will likely try to be as focused as possible when talking to you. He will remember everything you say to him. Whether it is your interest in a specific career or your favorite band, movie, or even book – if a man has taken an interest, he’ll try to find out more about you.

For example, what does it mean when a guy says he thinks about you after doing, listening to, or watching something? That’s clearly a sign you’re always on his mind, which often means he’s deeply interested and wants to build some rapport.

This is one of the secret signs of a male attraction that you shouldn’t overlook. Guys who show this kind of interest and that show a desire to communicate are often genuinely interested and aren’t afraid of getting involved deeply with you.

5. He’s Always Trying to Make you Laugh and Laughs at Everything You Say

An undeniable sign that he likes you is that he’s always trying to get a smile out of you. Most guys think that humor is one of the easiest ways to reach the heart of a woman. If they like you, they will undoubtedly try to make you laugh – at almost any time.

They may do this by teasing you or by merely telling jokes, trying to know what type of humor you prefer. In fact, one unmistakable way to know if they’re interested is by looking at them when they tell a joke. If the guy looks at you, that’s a sign; he’s trying to gauge whether you like him (or his jokes).

And it goes both ways. If a man really loves you, he will laugh at pretty much every joke you tell him. Are they laughing at what you say? Do they smile even when you tell weird jokes?

Some guys will even let offensive comments pass if they’re interested in more than a friendship. That’s why this is one of the signs that a guy likes you that you shouldn’t overlook.

Men may not even care what you’re saying, but they will smile and laugh either way just to make you feel better.

6. He Compliments You for Everything

Does he compliment your physical appearance, the boots and glasses you’re wearing, your lipstick, nail polish, or even bracelets or earrings? If he does any of that consistently, those are signs a male coworker likes you as he is trying to get into your head.

Sure, too many compliments can be annoying, but they may also be the only way the guy knows how to show interest. Especially if they notice when you make a physical change – that’s a great sign of interest.

And how to tell if a shy guy likes you if he can’t say proper compliments? Look for signs of even a bit of a positive thing about you. He may not compliment you directly, but could compliment your work or specific interest, like “You have great taste in music!” or “Your writing is excellent!”

7. He makes an effort to spend time with you

Men generally like to stay at home and spend time alone. So it’s pretty obvious that a man likes you if he makes an effort to spend time with you. If a man has a very busy schedule but consistently finds time to make plans to see you, it speaks volumes about how they feel about you.

When they are constantly thinking of you, there is a good chance it means they want to spend time with you and be involved in your day-to-day life.

His desire for frequent face-to-face interactions with you shows his signs of deep attraction towards you.

8. He Uses Your Name All the Time

Last but not least, how do you know if a man is emotionally attracted to you? The clearest way is to gauge how many times he uses your name when talking to you.

Generally, people who are always thinking of other people use their name more consistently because they feel more comfortable with it. And why is he thinking about you? He’s either in love or likes you a lot.

At the same time, how do you know if someone likes you but doesn’t show it to you? Check whether he talks to other people about you. If he just can’t stop talking about you or praising your work to others, it’s a great sign.

How many powerful signs of male attraction did you spot?

Men will show their interest in a wide array of ways. Outgoing guys will be the most obvious, always trying to make you laugh, compliment, and tease you consistently. Shy guys will be more subtle, trying to hide their emotions but showing more subconscious signs, like listening to you carefully and getting physically close.

Either way, it shouldn’t be too hard to gauge when this happens. A bit of patience and attention will help you find out. So, are you ready to put these ideas to the test?

How to Rekindle a Relationship – Top 7 Tips for Seniors Sex

SUBSCRIBE to stay up to date on our Products, News, Sales, and Offers!

Thank you! You are now subscribed so lookout for the next newsletter.   We may send you 2 or 3 emails over the next few days, just so you have a better idea about all the benefits that our products offer. Afterwards, our newsletter is sent monthly.

You've just added this product to the cart:

You can find out more about which cookies we are using or switch them off in settings.

This website uses cookies so that we can provide you with the best user experience possible while you navigate through the website. Out of these cookies, the cookies that are categorized as necessary are stored on your browser as they are essential for the working of basic functionalities of the website.

We also use third-party cookies that help us analyze and understand how you use this website. These cookies will be stored in your browser only with your consent. You also have the option to opt-out of these cookies. But opting out of some of these cookies may have an effect on your browsing experience.

If you disable this cookie, we will not be able to save your preferences. This means that every time you visit this website you will need to enable or disable cookies again.

Please enable Strictly Necessary Cookies first so that we can save your preferences!